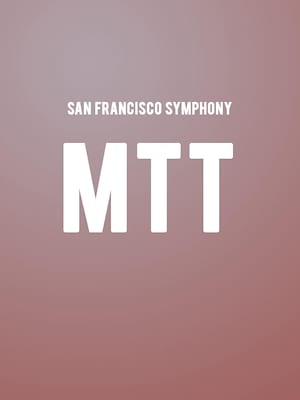 Lope brought a dozen or so wind, brass and percussion players to the stage for a whimsical and jocular interlude that describes the pleasures and excitement of a routine daily walk, from a dog's perspective.

See in the spring with the San Francisco Symphony and its esteemed Music Director Micheal Tilson Thomas (affectionately known as MTT) for this revitalizing program featuring the West Coast premiere of his 'whimsical and jocular' 2012 composition Lope, and culminating with a complete performance of Stravinsky's perennially exhilarating masterwork; Firebird.

Also joining MTT and the Symphony will be French cellist Gautier Capuchon who'll lend his talents to Shostakovich's 1966 Cello Concerto No.2 in a major, Opus 126. If ever there was a program to invoke the season, this is it!

Photo by Ira Selendripity on Unsplash

Sound good to you? Share this page on social media and let your friends know about San Francisco Symphony - Michael Tilson Thomas at Davies Symphony Hall.