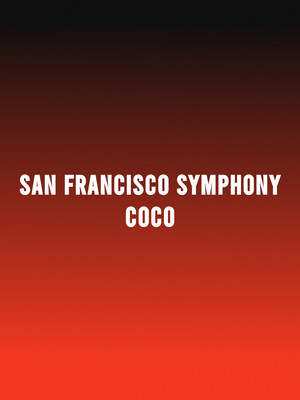 a soundtrack that tells the story of love, family, and the importance of music to help us live to the fullest.

For two nights in November, Pixar's smash hit musical adventure Coco is transformed into an immersive orchestral experience for all the family, with the San Francisco Symphony Orchestra accompanying the movie with a live score. Emil DeCou conducts the orchestra through the Mexican themed soundtrack whilst the Academy Award and Golden Globe winning picture plays on the big screen behind.

Coco is the story of a young boy with musical aspirations who finds himself on a spectacular journey to the land of the dead in search of his great-great-grandfather. The masterful soundtrack was composed by Michael Giacchino (Up, Star Trek Beyond, Cars 2) with critically acclaimed songs also contributed by Grammy Award winning songwriting duo Kristen Anderson-Lopez and Robert Lopez among others.

Sound good to you? Share this page on social media and let your friends know about San Francisco Symphony: Coco - Film at Davies Symphony Hall.