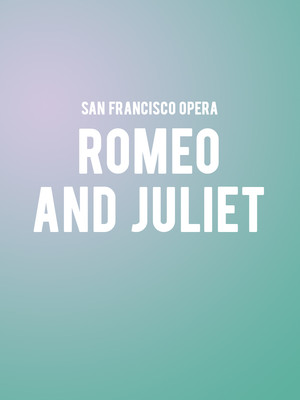 Comprises a delicious combination of Elizabethan drama and French Romanticism

A tale as old as time

If you thought your family was dysfunctional, try being the two most famous young lovers in literature. Whilst Romeo Capulet and Juliet Montague are concerned with being star-crossed, their rival clans will stop at nothing to destroy the other. When it becomes clear the match will not be tolerated, the pair hatches a scheme to escape the embittered streets of Verona; only the outcome depends on some dangerous trickery that might just see their fates entwined forever, and not in the marriage bed as previously planned.

Sung in French with English supertitles

Three hours with one intermission

The San Francisco Opera performance of Romeo and Juliet was ultimately... more

Sound good to you? Share this page on social media and let your friends know about San Francisco Opera - Romeo and Juliet at War Memorial Opera House.