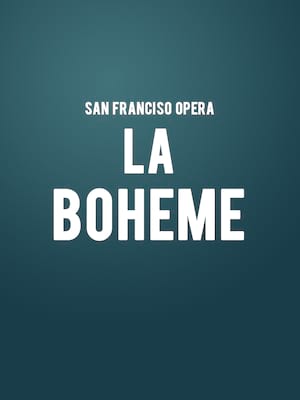 Caird enabled us to savor the sweetness of our youth and our romances and ravages, and we saw it from both outside and in.

Back by popular demand

What is the story of La Boheme?

Set in 1840s Paris, La Boheme tells of the doomed love between a struggling poet Rodolfo, and a seamstress Mimi. Their love is an all-consuming one, yet it's ultimately dashed by the poverty which surrounds them. Since its premiere in 1896, La Boheme has grown into one of the most beloved operas in the world, with only Puccini's other masterwork Madama Butterfly rivaling it for sheer popularity. As Romeo and Juliet is to the theatre, La Boheme is to opera, managing to exude an achingly romantic tenderness but never once slipping over into sentimentality.

Sung in Italian with English subtitles

Two hours and 12 minutes, including one intermission

Photo by Moodywalk on Unsplash

Sound good to you? Share this page on social media and let your friends know about San Francisco Opera: La Boheme at War Memorial Opera House.