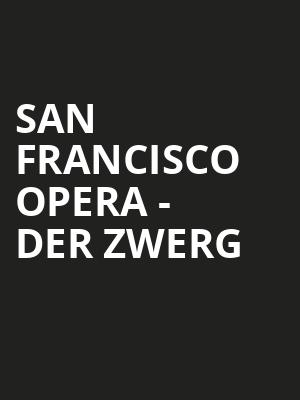 a drama of powerful humanity, and one with significant additional resonance in a world where cruelty and intolerance are on the rise.

In Spring 2021 San Francisco Opera presents a new production for the company, with a moving performance of Alexander Von Zemlinsky's operatic adaptation of Oscar Wilde's The Birthday of the Infanta. An expressive masterpiece which was initially suppressed by the German regime in the years leading up to WWII, De Zwerg is a haunting tale of an outsider's fateful adoration of a princess.

Led by accomplished Hungarian conductor Henrik Nanasi under the direction of Tony Award winner Darko Tresnjak, the opera sees American tenor Clay Hilley make his San Francisco debut in the role of The Dwarf. The performance is a production of LA opera.

Sound good to you? Share this page on social media and let your friends know about San Francisco Opera - Der Zwerg at War Memorial Opera House.