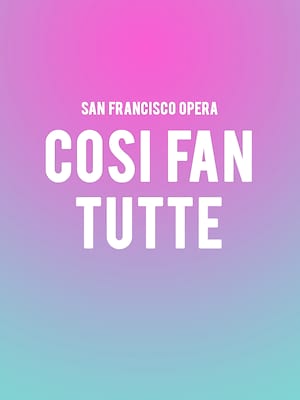 Flirtation and fidelity are the order of the day in Mozart's sublime opera buffa Cosi Fan Tutte (which translates are 'women are all, and always so.') Brought to the stage by the creative team behind 2019 smash hit The Marriage Of Figaro, the San Francisco's latest modernized production of the celebrated sonic comedy unfurls its exquisite arias, lavish costumes and sweeping sets as part of Season Two of the Mozart/Da Ponte Trilogy.

What is Cose Fan Tutte About?

Two Sisters, Fiordiligi and Dorabella are persistently wooed by a pair of foreigners while their soldier fiances are away at war, but this is just a test of fidelity set up by the philosophizing master of ceremonies, Don Alfonso who gains a collaborator in Despina the maid. Alas, the foreigners are in fact their betrothed in disguise. Guglielmo and Ferrando set out to seduce the other's partner in order to win the wager set before them by Alfonso. Over the course of the deception, the young couple's definition of love and certainty is thrown off-kilter, with their feelings revealed to us through Mozart's masterful score.