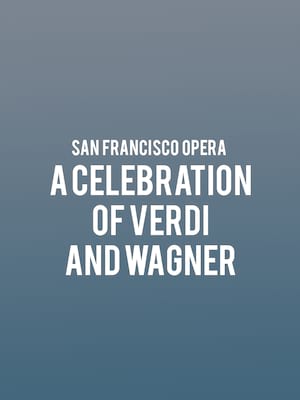 San Francisco Opera - A Celebration of Verdi and Wagner

The two most influential figures in 19th century opera

Why See San Francisco Opera - A Celebration of Verdi and Wagner?

Celebrating The Genius of Verdi and Wagner

If you like your opera epic and soul-stirring then San Francisco Opera's resplendent sonic celebration of Verdi and Wagner is just the ticket. For three special performances only, Armenian operatic soprano Lianna Haroutounian and Swedish dramatic soprano Irene Theorin (two of the foremost interpreters of the Italian and German repertoire in the world) are set to take to the War Memorial Opera House stage to bring the works of the giants of 19th-century opera to vivid life once more.

Whilst they flourished in the same era, Verdi and Wagner were indeed creative opposites and were known to dislike each other's works. Verdi, an Italian, came to popular attention thanks to his grand opera style, simple, optimistic and overwhelmingly adored. Conversely, Wagner, a German, took his art form very seriously and wrote melancholic, often revolutionary pieces filled with bombast. Harmonic opposites, to hear their works side by side is to hear classical music history in motion.

Sound good to you? Share this page on social media and let your friends know about San Francisco Opera - A Celebration of Verdi and Wagner at War Memorial Opera House.