Sorry! You missed FKJ at The Warfield 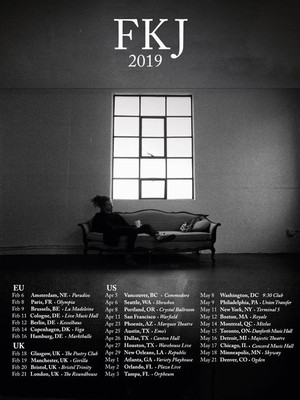 ...the electronic virtuoso has a way with resonance, alluring audiences with gentle smooth tones and driving beats. The full near 100-minute set was a sturdy showcase of a well-honed musician in his element, interjecting soaring solos on the keyboard and

Parisian producer and performer Vincent Fenton AKA French Kiwi Juice (FKJ for short) is one of the forerunners of the freshly emerging New French House genre, deftly fusing sample-based electronica with mellow organic elements like jazzy guitar riffs, groove-laden, slow-burning beats, warm wurlitzers and lilting guest vocals. Originally trained as a sound engineer for film, FKJ simultaneously honed his self-taught musical skills, bringing a cinematic quality to the earthy, soulful songs he creates. Don't miss the rising multi-instrumentalist when he hits US shores in early 2019, timed to coincide with the release of his debut eponymous album on March 3rd.

Stunning quality of his recorded artistry aside, FKJ first made his mark on the French music scene thanks to his highly original and arresting DJ sets, which bring together a fine selection of songs and a fizzing creative energy that spills out into his hybrid live/DJ concerts, often spiralling into dazzling improvisational flights. Get lost in the sonic reveries of his driving rhythms, swirling synths and smooth palette of dance-inducing sounds!

Seen FKJ? Loved it? Hated it?

Sound good to you? Share this page on social media and let your friends know about FKJ at The Warfield.