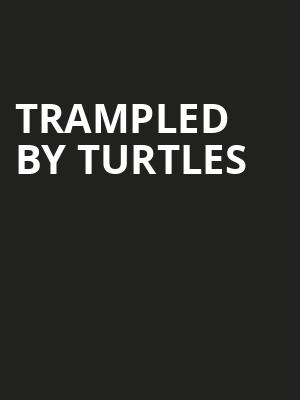 It takes a special breed to play folk/bluegrass faster and harder than any metal band out there, but anyone who's ever seen a Trampled by Turtles show knows the band is that breed.

Why See Trampled by Turtles?

the return of trampled by turtles

Bluegrass folk band Trampled by Turtles formed in 2003 in Minnesota and have since released nine studio albums, the latest being 'Life Is Good on the Open Road' in 2018. A contrast between emotional songwriting and hard-hitting rock beats, it's a welcome comeback for the band as they hit the road on tour!

Trampled by Turtles first gained notoriety by performing at various festivals across America. The band took to the stage at Coachella, Bonnaroo, Lollapalooza, Sasquatch Festival and more, using their harmonious vocals and skilled instrumentals to win crowds over. Since their formation, Trampled by Turtles have received three US Billboard number one albums.

Seen Trampled by Turtles? Loved it? Hated it?

Sound good to you? Share this page on social media and let your friends know about Trampled by Turtles at The Fillmore.