Sorry! You missed Our Last Night at The Fillmore 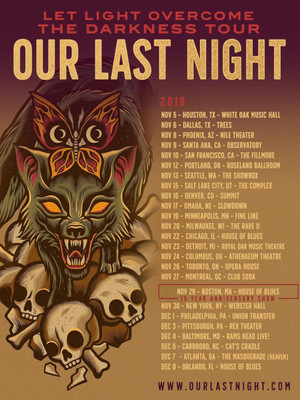 the energy every member of Our Last Night put out into the crowd was incredible.

Why See Our Last Night?

Our Last Night head out on US tour

Post-hardcore band Our Last Night head out on an epic five-week tour of America this November, bringing their brand of heavy alternative rock crossed with pop party tunes to moshpits across the country. Known for their hardcore covers of popular songs as well as their own extensive original output, this tour comes off the back of their most recent album Let Light Overcome.

Formed in New Hampshire in 2004, Our Last Night's latest effort is their fifth original studio album, whilst their heavy rock interpretations of mainstream pop music form a regular exciting aside for band and fans alike. Covers include everything from Ed Sheeran's 'Shape of You' to Kendrick Lamar's 'Humble' and 2018 saw them cover the Baha Men's 'Who Let The Dogs Out' featuring the Baha Men themselves!

Seen Our Last Night? Loved it? Hated it?

Sound good to you? Share this page on social media and let your friends know about Our Last Night at The Fillmore.