Sorry! You missed Hot Chip at The Catalyst

You can catch Hot Chip at Brooklyn Bowl in Las Vegas, showing Oct 14, 2020

Hot Chip is also touring to: 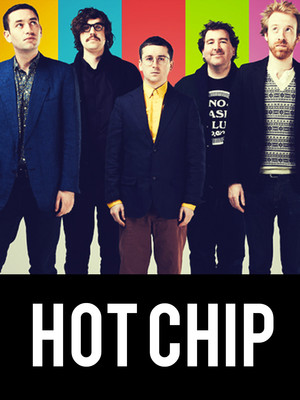 Thousands of us have shared youth-defining moments of glory when we lost our sh*t during Hot Chip shows, probably at festivals, probably during 'Over And Over', the tune that broke them way back in 2007.

Grammy nominees Hot Chip hit the road in their latest tour! Known for heavily improvising their studio album works in live performances, they are a regular feature on the festival circuit on both sides of the Atlantic, even playing at Coachella. Also possessing a keen DJ contingent within the ranks, the band have released mix CDs and other material for international release, boosting their profile even further.

Hot Chip has been described by many as one of the most distinctive and innovative bands who combine dance music and indie to emerge since the new millennium, starting the ball rolling in that year with the critically acclaimed debut Mexico. Combining piano, acoustic guitar with techno beats, the sound is given a unique spin by the two contrasting lead vocalists Alexis Taylor and Joe Goddard.

Sound good to you? Share this page on social media and let your friends know about Hot Chip at The Catalyst.