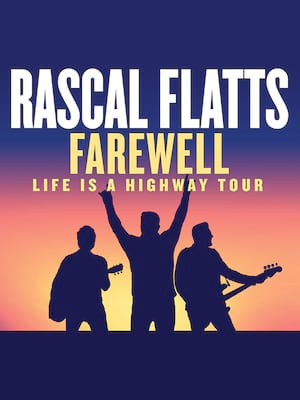 Say goodbye to Rascal Flatts in style in their farewell tour!

After twenty years in the 'biz Country trio, Rascal Flatts have announced that they will be hitting the road one last time in 2020 in their Rascal Flatts Farewell: Life Is A Highway Tour. Boasting of 11 studio albums, seven of which have gone Platinum and four hitting the number one spot, Rascal Flatts are one of the most successful vocal groups in North America!

Kicking off in June this extensive set of dates will showcase some of the group's most iconic singles. Expect to hear tunes like "These Days", "What Hurts The Most", "Take Me There" and "Here Comes Goodbye" when the talented trio land in your town!

Since the release of their self-titled debut album in the year 2000, Rascal Flatts have been at the forefront of the ever-growing Country music scene. Globally loved for their country-pop sound, catchy melodies and magnetic stage presence the gentlemen have garnered a Grammy award and received their star on the Hollywood Walk of Fame! Don't miss them doing what they do best one last time... performing live!

JRP: “Too Long for Headliner to Hit Stage & Trying Too Hard to Update Their Sound”

The Rascal Flatts concert was advertised with a start time of 5:30PM. That... more

While sitting in Pavilion, instrumentals were excessively loud and it muffled... more

Sound good to you? Share this page on social media and let your friends know about Rascal Flatts at Shoreline Amphitheatre.