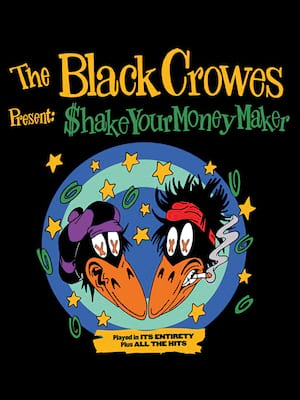 Black Crowes are back!

13 years after their last live show Chris and Rich Robinson reunite as Black Crowes as they celebrate the 30th anniversary of their debut album, "Shake Your Money Maker". This hotly anticipated return will see the duo team up with a host of new bandmates as they bring Black Crowes back to their original and purest rock sound.

Although they formed in the mid-'80s Black Crowes became internationally known with the release of "Shake Your Money Maker" in 1990. This debut album hit number four in the US charts and became multi-platinum! Their success continued with a string of chart-topping albums ("The Southen Harmony and Musical Companion", "Amorica" and "Three Snakes and One Charm") before the group disbanded (for the first time) in the early 2000's.

Although their later years were consumed by in-fighting between the two brothers, Chris and Rich never lost their love of Black Crowes. On their come-back, Rich said "We love this music. We're musicians. We're brothers. We love each other" and Chris said "There's no extraneous stuff. This is the purest Balck Crowes that people first [heard]... I hope we reconnect with some people who lost their way with us." (Rolling Stone)

Don't miss your chance to fall back in love with Black Crowes as they hit the road once again!

Sound good to you? Share this page on social media and let your friends know about Black Crowes at Shoreline Amphitheatre.