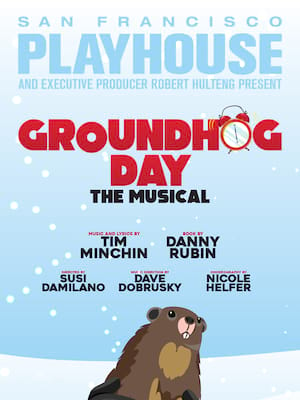 What if there was no tomorrow?

Misanthropic big-city weatherman Phil Connors is clearly furious to be sent on an outside broadcast to the small town of Punxsutawney, PA for the annual Groundhog Day ceremony. Little does he know this trip will change his life forever! Hilarious, heartwarming and endlessly innovative, this fantastic musical adaptation of the 1993 movie is a joy to behold. With a book by the film's screenwriter and witty music and lyrics by Tim Minchin, this is one screen to stage translation you won't want to miss!

The story of Groundhog day

We follow Phil Connors, an arrogant TV weather reporter who is tasked with covering the biggest story in the smallest town in Pennsylvania; the emergence of the local groundhog, Punxatawney Phil, whose appearance will herald the end of winter. Accompanied by his new producer and a jaded cameraman, this just seems to be a day to get over and done with, as soon as possible.

However, the fates seem to have a different idea in store for the reporter, as he is forced to relive the same day over and over (and over) again, until he learns an important lesson about life and love.

Sound good to you? Share this page on social media and let your friends know about Groundhog Day at San Francisco Playhouse.