Sorry! You missed The Musical Box at Regency Ballroom 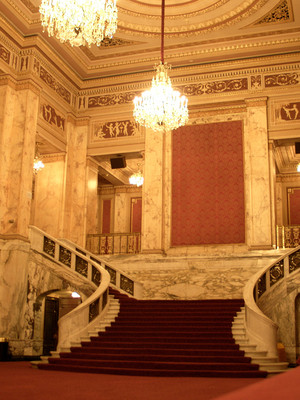 You can catch The Musical Box at Connor Palace Theater in Cleveland, showing Apr 23, 2023

The Musical Box is also touring to:

They're not a tribute band, they have taken a period and are faithfully reproducing it in the same way that someone would do a theatrical production.

Why See The Musical Box?

ENDORSED BY GENESIS THEMSELVES

For the first time in their 25 year history, French Canadian purveyors of Genesis and world-beloved tribute band The Musical Box are taking on an unprecedented challenge, covering the band's output from 1974 - 75 with this licensed epically imagined version of The Lamb Lies Down on Broadway, immersing audiences in the band's original show with incredible accuracy and respect.

The act have moved frequently between the different eras of Genesis' music, from the Gabriel period, to back to the 1976 Trick of the Tail concerts and everything in between. In 2013/14 the band toured the "Selling England by the Pound' celebrating what would have been Genesis' 40th Anniversary. This year they top it all with this 'fictitious' set that sets out to recreate the early years over three acts, including music from Trick of the Tail, Wind & Wuthering, The Lamb Lies Down on Broadway, Trespass, Nursery Cryme, Foxtrot, Selling England By The Pound and other surprises!

this group is the most Authentic Gabriel/genesis band iv'e ever seen,nobody... more

Sound good to you? Share this page on social media and let your friends know about The Musical Box at Regency Ballroom.