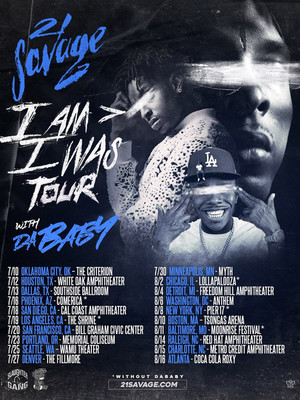 21 Savage is about to break into the mainstream with a vengeance.

21 savage Heads out On a brand new Tour

Well known as the birthplace of many successful modern rap acts, Atlanta's latest phenomenon 21 Savage, born Shayaa Bin Abraham-Joseph, is riding the wave from underground to mainstream, bringing his raw and emotive brand of hip hop on his brand new 2019 tour, I Am > I Was.

Debuting in 2014 with the single 'Picky' produced by DJ Plugg, the young rapper cut his teeth on the rough streets of his home city, imbuing his music with a streetwise authenticity. His street-tales chronicle the struggles of his early life, while a deadpan delivery glides effortlessly over hypnotic beats. Don't miss the chance to see this fledgling artist grow into a force to be reckoned with.

Sound good to you? Share this page on social media and let your friends know about 21 Savage at Nob Hill Masonic Center.