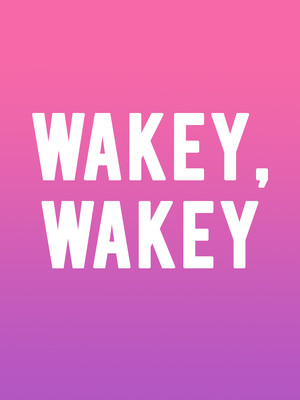 Wakey, Wakey is a remarkable combination of the everyday and the extraordinary that invites you to share the pleasure, humor, and sheer absurdity of life.

Will Eno's comedy-drama Wakey, Wakey comes to San Francisco during the 2019/20 season, followig its off-Broadway debut. Described as a "strange and beguiling little play" by Hollywood Reporter and a piece that finds "the quirky side of dying" by Time Out, this West Coast premiere is set to star two-time Emmy winner Tony Hale.

The two-character story follows an unnamed man known to the audience as 'Guy' who is bound to a wheelchair and presented as being at the end of his life. Audiences listen to Guy's near-death thoughts and streams of consciousness about life and what happens after its all over. In part, the play was written by Eno as a tribute to late artistic director and close friend of his, James Houghton.

Eno is a Brooklyn based director who received the 2014 Obie Award and 2014 Lucille Lortel Award for Outstanding Play for 'Open House.' He also received a 2014 Drama Desk Award.

Sound good to you? Share this page on social media and let your friends know about Wakey, Wakey at A.C.T Geary Theatre.