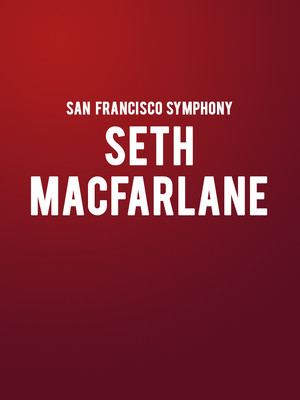 I love and am fascinated by exciting orchestration - what you can do with a band that size - and I think in many ways it's a lost art.

More than just a family guy!

Multitalented entertainer, actor, producer and singer Seth MacFarlane joins the San Francisco Symphony to ring in 2020 in big band style. Known as much for his honeyed baritone as for his on stage and screen, an evening with Seth and the SFO will make for a New Years Eve to remember.

As well as his credits, MacFarlane's talents as a singer came to recognition in 2009 when he first performed at the BBC Proms in the UK, a feat which he reprised in the 2015 series. Strongly influenced by the singing style of Frank Sinatra, MacFarlane regularly demonstrates his vocal prowess with easy listening, jazz and Broadway-inspired tunes in concert.

Sound good to you? Share this page on social media and let your friends know about San Francisco Symphony with Seth MacFarlane at Davies Symphony Hall.