Sorry! You missed San Francisco Symphony: Get Out - Film at Davies Symphony Hall 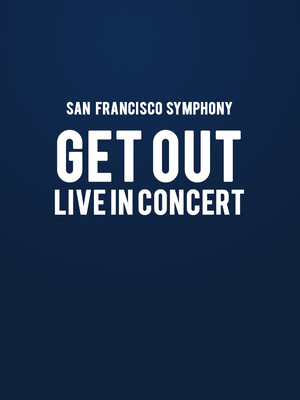 San Francisco Symphony: Get Out - Film

As a movie, it needs to sound like something we hadn't experienced before.

Why See San Francisco Symphony: Get Out - Film?

Enjoy the breakout hit of 2017, Jordan Peele's thrilling comedy/horror masterpiece like never before in this live-to-screen concert. Conducted by the composer for the movie himself, Micheal Abels and featuring the DC6 singers, experience the chills on a huge scale as the unwitting Chris heads to his girlfriend's isolated family home for a weekend he'll never forget.

Discovered by Peele on YouTube, Get Out was Michael Abel's first movie soundtrack. In addition to being influenced by iconic scores throughout cinematic history including Candyman, The Shining and Halloween, Abel also layers Swahili voices and classical flair into his mix.

Sound good to you? Share this page on social media and let your friends know about San Francisco Symphony: Get Out - Film at Davies Symphony Hall.