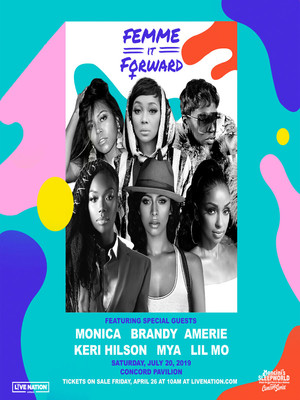 It may be a man's world out there, but the entertainment universe is equally lit by the brightest female stars.

Some of the most respected women in music unite for an exciting tour that celebrates talented women in the industry and features performances from Brandy, Monica, Keri Hilson, Mya, Lil Mo and Amerie. Live Nation Urban described the event as highlighting "the entertainment industry's most creative and accomplished female visionaries, both on the stage and behind the scenes."

'90s hitmakers Brandy and Monica are two of the headliners and are also two of the biggest female superstars of their decade. Their joint single 'The Boy Is Mine' is one of the best selling duets of all time. Brandy stepped into superstardom when she released her self-titled debut in 1994. The album went on to sell six million copies worldwide and be certified quadruple platinum in the US.

Monica has seen many successes herself. From selling 5.3 million albums in the US to being the youngest recording act to ever have two consecutive chart-topping hits on the Billboard Top R&B Singles chart, Monica remains one of the greatest of her time.

This concert is a powerful ode to women in music everywhere.

Sound good to you? Share this page on social media and let your friends know about Femme It Forward Tour (Monica, Brandy, Mya, Keri Hilson) at Concord Pavilion.