Sorry! You missed Elvis Costello and Blondie at Concord Pavilion 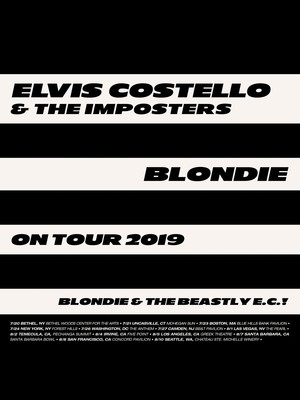 Harry's assuredness is as appealing now as it was then. Even when she takes off the mask and she's just a 72-year-old body-popping in plain black leggings and platform sandals, there's a calming grace in simply being in her presence.

Why See Elvis Costello and Blondie?

Two iconic New Wave acts join forces for a hotly anticipated Summer Tour! Revel in the sounds of 70s punk, British invasion rock and disco when troubadour poet Elvis Costello & The Imposters and Blondie hit the road together on a co-headline jaunt, performing around the US for 14 special dates.

The Debbie Harry-fronted New York outfit formed in 1974, originally playing two shows under the moniker Angel and the Snake before changing their name to the iconic Blondie after Harry was catcalled by a truck driver, who shouted 'Hey Blondie' as he drove past. To date, the Rock and Roll Hall of Famers have sold over 40 million records worldwide thanks to an adventurous creative spirit and career-defining songs like Heart Of Glass and Call Me.

Although Costello came up in the British punk scene, he shares a history with Blondie, having both emerged in the 70s and shared spots on top of the charts with their respective third albums. Celebrated as one of the greatest living songwriters, his literate, astute and poetic lyrics, as well as a musical eclecticism that fuses any genre he pleases, marks him with the same legendary status as Bob Dylan and Leonard Cohen.

Blondie was Fantastic and put on a great show with a very good sound mix.... more

L A: “Blondie and Elvis Costello ”

Went mostly to see Blondie, they were great! I love Deborah Harry and... more

Sound good to you? Share this page on social media and let your friends know about Elvis Costello and Blondie at Concord Pavilion.