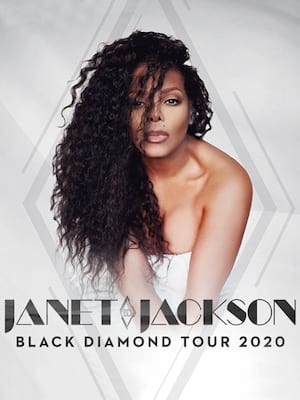 Don't miss pop legend, Janet Jackson, as she takes to the road again in 2020 on the extensive Black Diamond World Tour. In addition, sampling new music from the upcoming release of the same name, fans can also expect an extra-special performance of her legendary Rhythm Nation 1814. Hitting the number one spot in the US charts Rhythm Nation 1814 went muti platinum and sparked Janet to become one of the undisputed princesses of pop.

A member of the Jackson dynasty, Janet performed alongside her brothers as a child, but she really came into her own during the mid-1980s. It was 1986's Platinum-selling Control that introduced the world to her trademark synth-heavy fusion of r&b and soul, a music style that would make her one of the biggest names in pop music over the next two decades.

The concert last night was of one of the best I’ve seen in a while... more

She is timeless, strong, flawless, top notch professional at all times.... more

Sound good to you? Share this page on social media and let your friends know about Janet Jackson at Chase Center.