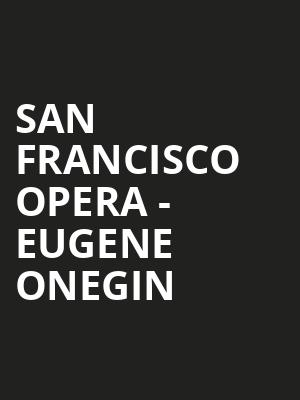 Photo by Debby Hudson on Unsplash

Passion, tragedy and brooding make this a Tchaikovsky showstopper

Pride comes before a fall

San Francisco Opera's Centennial season continues with the high drama of Tchaikovsky's adaptation of Alexander Pushkin's Eugene Onegin. A young woman's unrequited love sets off a deadly chain of events in this radiant opera, full of sweeping romantic melodies and intense scenes as the titular Eugene Onegin's fixation on appearances leads him to a fatal duel.

When Eugene Onegin, a fun-loving and narcissistic young gentleman, accompanies his best friend, Lensky, to the Larin Country State in St. Petersburg his life is ultimately turned upside down as he meets the modest and quiet Tatyana. Initially rejecting her advances, Onegin goes on his way unaware that a mere five years later his encounter with the young girl will change both their lives beyond repair.

Sung in Russian with English supertitles

Three hours with one intermission

Sound good to you? Share this page on social media and let your friends know about San Francisco Opera - Eugene Onegin at War Memorial Opera House.