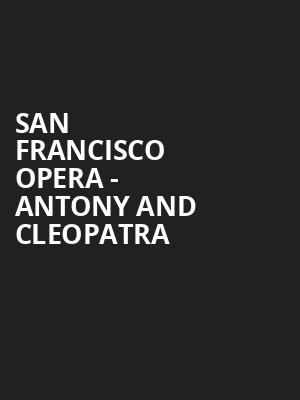 Photo by Tom Podmore on Unsplash

She was his queen. He was her downfall

A Romance For The Ages

Picking up where Julius Caesar ended, Mark Antony is at the height of his power following Caesar's assassination. However, he leaves his empire for a life of seduction and decadence with his mistress, Cleopatra, Queen of Egypt. Mark Antony becomes torn between love and duty, as his military brilliance deserts him, him his relationship with Cleopatra is thrown into danger.

Sung in English with English Supertitles

Two hours, 56 minutes including one intermission

Sound good to you? Share this page on social media and let your friends know about San Francisco Opera - Antony and Cleopatra at War Memorial Opera House.