From your city, San Francisco, California to anywhere in the world! 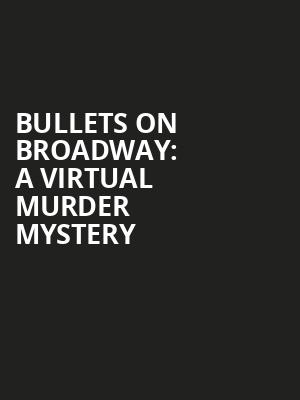 Hold onto your overpriced wine, the magic of Broadway is coming to your screen

Why See Bullets on Broadway: A Virtual Murder Mystery?

Murder, Mystery & Delightful Mayhem in the Comfort of Your Own Home

Add some intriguing mystery with a big side helping of Broadway razzle-dazzle to your next virtual family chat, online office event or game night with pals! Formed during the advent of the COVID-19 crisis, Broadway Murder Mysteries takes party games to the next level with a creative team comprised of the Great White Way's top writing and voice acting talents. The innovative theatre company proudly presents its latest digital adventure Bullets On Broadway, a rip-roaring whodunnit that promises theatrical chills, thrills and more!

With the option of downloading the game to play in a live setting or downloading the instructions to host it via Zoom, Bullets On Broadway is a highly interactive Virtual Murder Mystery Party. It chronicles the opening night of new Broadway production entitled Murder In The First. Whilst the cast and crew ready themselves for opening night backstage, a murder most foul threatens to derail the show. Was it at the hands of a cast member, or someone in the audience..? Or could it be you!? The only way to find out is to play.

Seen Bullets on Broadway: A Virtual Murder Mystery? Loved it? Hated it?

Sound good to you? Share this page on social media and let your friends know about Bullets on Broadway: A Virtual Murder Mystery at Virtual Experiences for San Francisco.