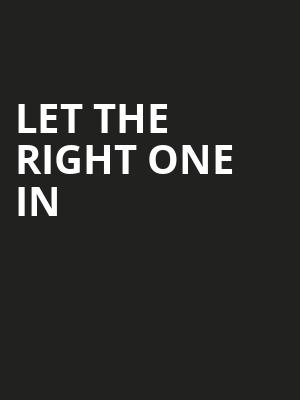 Photo by Fineas Anton on Unsplash

Let The Right One In

Just when you thought you'd had your fill of young vampires in love, along comes a ravishing little romance of the undead that's guaranteed to warm - and break - your heart, even as it chills your blood.

Why See Let The Right One In?

WILL YOU OPEN THE DOOR?

This quietly moving and spooky show from the Tony-winning minds behind Harry Potter and the Cursed Child makes its West Coast premiere with Berkely Rep in spring 2023. Adapted from John Ajvide Lindqvist's cult novel, Jack Thorne provides the book, with direction from John Tiffany. Movement comes from Steven Hogget. Ethereal, compelling and unforgettable, the production premiered in London in 2014 where it was described by The Observer as "First-rate... situated on the slipway between dream and daily life... a mesmerizing evening".

On the dreary housing estate where Oskar lives with his preoccupied parents, the status quo of downtrodden misery is rocked by a series of sinister killings, spilling blood onto the snowy ground, and mystifying the residents and the police.

But could Oskar be on to the perpetrator? Striking up a strange friendship with his reclusive neighbor Eli, he learns more about life and death than he set out to in this coming-of-age story, with a supernatural (but subtle) difference. A haunting, heartbreaking theatrical masterpiece, Let The Right One In has all the makings of a clever and moving hit, that will elicit gasps long after you've left the stalls.

Suitable for ages 13 and upwards

Seen Let The Right One In? Loved it? Hated it?

Sound good to you? Share this page on social media and let your friends know about Let The Right One In at Roda Theatre.