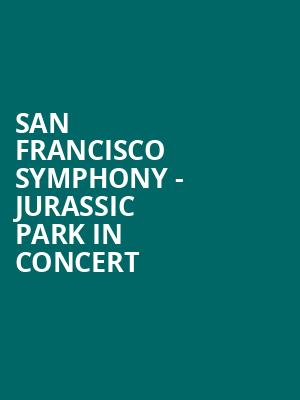 Jurassic Park was built, like a ride, to withstand repeated visits.

An Evening Of Dinosaurs & Unforgettable Music

Three decades ago, a film so gargantuan in scope in ambition that it blazed the trail for the classic Hollywood blockbuster, and special effects technology, captured the hearts and minds of audiences around the world. Steven Spielberg's sci-fi adventure Jurassic Park instantly became the highest-grossing film ever made when it was released in 1993, becoming a pop phenomenon that's still spawning sequels today thanks to its heady mix of action, a score by John Williams, and of course, earth-shaking dinosaurs!

Don't miss this chance to return to where it all began during a special live HD screening of the first film in the franchise, with live accompaniment by the San Francisco Symphony. Williams' unforgettable compositions for the iconic cinematic thrill ride have become some of his most popular, including the proud trumpet fanfare of "Journey To The Island' and the sweeping, awe-and-wonder-conjuring 'Theme from Jurassic Park', a memorable melange of masterful melody, rhythm, harmony and orchestration that lives on in the collective memory.

Sound good to you? Share this page on social media and let your friends know about San Francisco Symphony - Jurassic Park In Concert at Davies Symphony Hall.