Sorry! You missed T-Pain at The Warfield 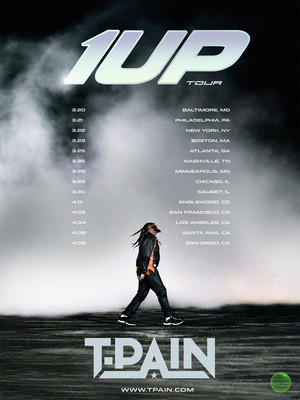 Known for his party-starting, autotune-laden anthems, two time Grammy-winning rapper singer-songwriter T-Pain showed an entirely different side of himself during his 2014 NPR Tiny Concert. A popular stripped-back live session, it put the spotlight on T-Pain's soulful, unaffected vocals drawing a whole new set of fans. Inspired by the viral video's 10 million-view-success, the R&B mogul is heading out on his headlining his 14-date 1UP Tour!

Transforming smash hit dance-floor fillers like Bartender and Buy U A Drank into tender, emotional ballads, T-Pain will be accompanied by a live backing band with all new arrangements. Forerunner of the now ubiquitous autotune trend, the performer is revelling in the chance to show haters and fans just how good his vocals are behind the top-hat and swag.

Sound good to you? Share this page on social media and let your friends know about T-Pain at The Warfield.