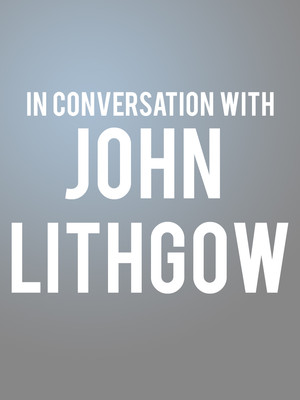 John Lithgow shares the stage with Calvin Trillin in conversation

in Conversation with John Lithgow and Calvin Trillin

For one night only, you get the chance to see Tony, Emmy and Golden Globe award-winning John Lithgow as he hits the Sydney Goldstein Theater to join humorist and journalist Calvin Trillin in conversation. Expect to hear news on Lithgow's forthcoming book of poetry, Dumpty: The Age of Trump in Verse, along with his sharp wit and lyricism.

Sitting alongside Lithgow will be New Yorker Magazine's Calvin Trillin. Beginning his career in 1963, Trillin has traveled far and wide in search of obscure stories for you to sink your teeth into. He soon wanted to put a hold on his more serious pieces, and began writing about food which has earned him a dedicated following and has been featured in multiple books.

Make sure you don't miss these two talented individuals, who are at the front of their trades, in this once in a lifetime event.

Sound good to you? Share this page on social media and let your friends know about John Lithgow at Sydney Goldstein Theater.