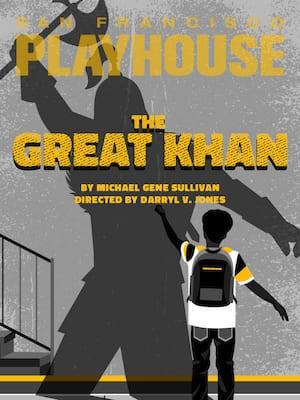 I want the audience to have a great time...then march out of the theatre and overthrow oppression by the corporatists

Why See The Great Khan?

The San Francisco Playhouse returns with the 2021/22 season, their most important year yet. With a mixture of classic theatre, exciting world premieres, and a stupendous musical finale, it's gearing up to be another unforgettable season from the esteemed company!

Opening proceedings is The Great Khan, a brand new world premiere by Micheal Gene Sullivan and directed by Darryl V. Jones, a co-production with the San Francisco Mime Troupe.

Jayden, an African American teenager, just wants to be his gamer, nerdy self. But his life changes when he saves a girl, Ant, from a sexual assault, and he and his mother are forced to move to keep him safe from the assailants. While he debates with himself if he should toughen up, Ant tries to reject the tough Black girl persona she has adopted. Both are trying to figure out how to define themselves in a culture that insists on seeing them as forever dangerous. Oh, and then Genghis Khan shows up. A National New Play Network rolling world premiere.

Seen The Great Khan? Loved it? Hated it?

Sound good to you? Share this page on social media and let your friends know about The Great Khan at San Francisco Playhouse.