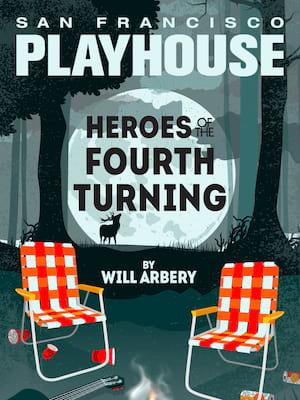 Heroes of the Fourth Turning

Why See Heroes of the Fourth Turning?

The San Francisco Playhouse returns with the 2021/22 season, their most important year yet. With a mixture of classic theatre, exciting world premieres, and a stupendous musical finale, it's gearing up to be another unforgettable season from the esteemed company. Third on the docket is Will Arbery's Pulitzer finalist, Heroes of the Fourth Turning.

Described by the New York Times as "an astonishing new play" and a "red-state unicorn", 'Heroes concerns a group of old college friends who left their Catholic alma mater in Wyoming seven years before, coming together to celebrate their old mentor. But as the reunion unwinds, so do the group's own opinions, leading to a chaotic clash of politics, inflamed debate, and spiritual confusion.

Sound good to you? Share this page on social media and let your friends know about Heroes of the Fourth Turning at San Francisco Playhouse.