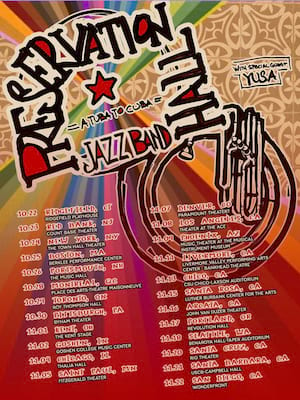 Reflecting the melting pot of culture and history that is their home city of New Orleans, the Preservation Hall Jazz Band has spent over 50 years carrying its musical torch, forging boldly forward into the future whilst proudly preserving its vibrant sonic past. The jazz outfit embarks on the hotly anticipated A Tuba To Cuba Tour to celebrate the summer 2018 release of their album of the same name.

Formed by bandleader and tuba player extraordinaire Allan Jaffe in the early 60s, the ever-evolving collective of respected jazz musicians took their name from their spiritual home - Preservation Hall in New Orlean's French Quarter. Their latest album forms the soundtrack of the A Tuba To Cuba documentary, which chronicles Jaffe and co's journey to Cuba to retrace the connection of New Orleans Jazz to traditional Cuban music.

These musicians put on an incredibly fun show! My 11 year old daughter... more

Sound good to you? Share this page on social media and let your friends know about Preservation Hall Jazz Band at Ruth Finley Person Theater.