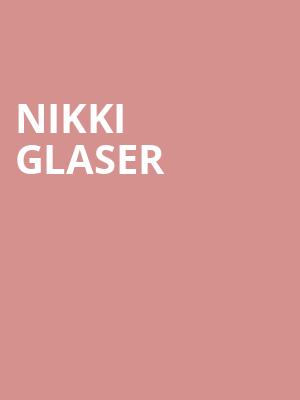 This tension between her bluntness and her anxiety has long been the engine fueling her charismatic, assured stand-up, the bedrock of her prolific young career.

Nikki Glaser Gets Too Personal On Tour

If you've ever had the pleasure of seeing an episode of Comedy Central mainstay 'Not Safe with Nikki Glaser', then you'll be well acquainted with her unapologetic, no-holds-barred comedy style, but you may still blush when confronted with her racy live stand-up routine. Leaving no stone unturned when it comes topics including sex, relationships, the single life, Target fashion triumphs and invasive TSA practices, Glaser spreads her mischievous glee around venues across North America on tour.

Not only has Glaser tickled the nation's funny bones on the small screen, but also appeared alongside Amy Schumer in feature film Trainwreck and produced a popular podcast in which she honed her oversharing, top notch comedy skills. Whilst she's at her razor-sharp best when getting way too personal, her hilarious rage also brings the belly laughs when she tears into vapid celebrity culture. Charismatic, consistently charming and constantly balancing frankness with neuroses and self-deprecation, Glaser's clearly on path to legend status.

Sound good to you? Share this page on social media and let your friends know about Nikki Glaser at Ruth Finley Person Theater.