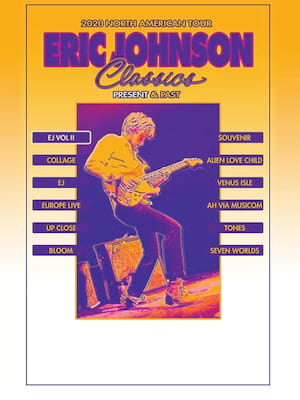 Eric Johnson won over the world with his talents back in 1990 certified platinum album, "Ah Via Musicom!" and Grammy-winning lead single "Cliffs of Dover" cementing him as one of the world's most incredible guitarists. Now celebrating the 30th anniversary of the feat, Eric hits the road once more in 2020 on the Classics tour. Alongside classics from the acoustic masterpiece, the shows will also feature pieces from the upcoming album EJ Vol. II

Best known for his electric guitar skills, Johnson is also a highly experienced lap-steel, resonator, bass, and acoustic guitarist. His resume doesn't end there, Johnson is also an accomplished vocalist and gifted pianist, the piano being his first instrument.

Make sure you catch Eric Johnson when he comes to a venue near you!

Lise H: “Eric Johnson, Ah Via Musicom at the Crest in Sacramento”

I completely agree with the other reviewer; this was a bucket list for... more

But wow! Most of the time I could close my eyes and it sounded just like... more

Sound good to you? Share this page on social media and let your friends know about Eric Johnson at Miner Auditorium.