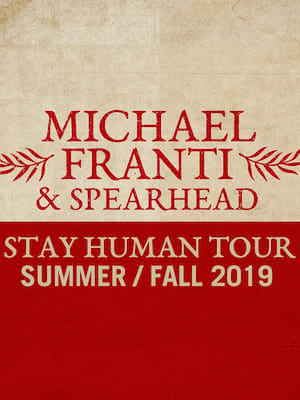 Michael Franti & Spearhead head out on tour in celebration of their 10th album!

Michael Franti and his band, Spearhead, head out on tour in 2019 in celebration of their newest album, Stay Human, Vol. II! In this brand new album, the band's tenth, Michael Franti is on a mission... To remind his fans and the album's listeners that there is still good in the world! Don't miss your chance to see Michael Franti & Spearhead live on this exclusive tour.

Musician, poet, activist, rapper and documentarian Michael Franti began his career in spoken word collective The Beatnigs. His time with the collective ignited his interest and passion for making music and he created Michael Franti & Spearhead in 1994. Blending hip-hop with funk, reggae, jazz, folk, and rock Franti focuses his music around social issues, using his eclectic sound to speak out against injustice and political issues, garnering himself fans across the globe.

Sound good to you? Share this page on social media and let your friends know about Michael Franti at Fox Theatre Oakland.