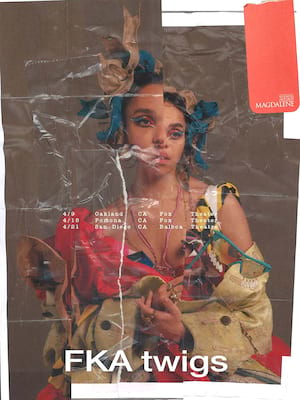 Leave the world you know at the door, because FKA Twigs is about to transport you to a whole new artistic realm. This world tour sees Twigs weaving performance and sound, with stand-out costumes and stunning pole-dancing; it's going to be a show like no other!

Twigs' debut album, LP1, signaled the emergence of a completely singular talent. Released in August of 2014, it fulfilled the promise of her two previous two EPs and proved she was more than worthy of the massive buzz garnered from her otherworldly music videos. Magdalene is set to confirm Twigs' reputation as one of the most exciting new artists of the decade.

Sound good to you? Share this page on social media and let your friends know about FKA Twigs at Fox Theatre Oakland.