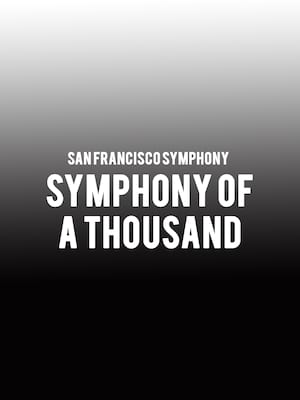 Under his baton, the ensemble secured its place among, and helped redefine the role and repertory of, America's top orchestras.

Why See San Francisco Symphony - Symphony of a Thousand?

After 25 years of groundbreaking performances with the San Francisco Symphony, the ensemble's 11th music director Michael Tilson Thomas brings his tenure to a close during the 2019/20 season. What better way to bring this historic chapter to an end than with a rousing performance of Mahler's truly epic Eight Symphony? Awarded three Grammy Awards for their recording of the monumental work, MTT and the SFS celebrate their time together with a victory lap of the highest order.

Dubbed the 'Symphony Of A Thousand', it's one of the largest-scale chorale works in the classical repertoire because of its required orchestral and vocal force. Mahler completed the colossal piece in a single, feverish eight-week burst of inspiration and completed in the Summer of 1906. Inspired by and encompassing the 9th century Latin hymn 'Veni, Creator Spiritus' as well as Goethe's Faust, the work's uplifting message speaks of redemption, as well of the love between the composer and his wife Alma. A rousing symphonic spectacle like no other, it is the perfect end to MTT's reign.

Sound good to you? Share this page on social media and let your friends know about San Francisco Symphony - Symphony of a Thousand at Davies Symphony Hall.