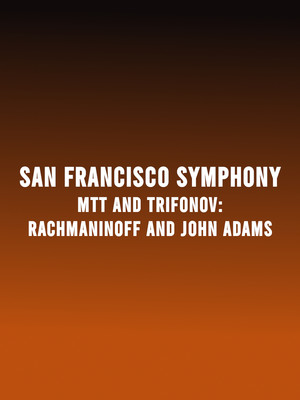 Davies Symphony Hall will witness four incredible nights in September in which the San Francisco Symphony performs the world premiere of a brand new work by celebrated composer John Adams. They'll then be joined on the piano by Daniil Trifonov for a rendition of Rachmaninoff's unique Fourth Piano Concerto, a truly forward thinking piece from 1926 managing to find a meeting point between classical, jazz and Russian traditional music. Closing with Schumann's inspiriting Symphony No. 3 and conducted by San Francisco's Michael Tilson Thomas, this is set to be an extraordinary event not to be missed.

Tilson Thomas is currently in his 23rd year at the helm of the San Francisco Symphony, currently the longest standing director of any major American orchestra. Russian pianist Daniil Trifonov won the 2018 Grammy award for for Best Classical Instrumental Solo and has been seen elsewhere in the US with the Philadelphia Orchestra, Seattle Symphony and Detroit Symphony.

Sound good to you? Share this page on social media and let your friends know about San Francisco Symphony - MTT and Trifonov: Rachmaninoff and John Adams at Davies Symphony Hall.