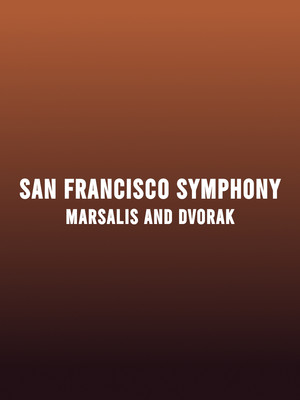 "Leading the orchestra with a sure and energetic hand, [Gaffigan] coaxes the loveliest of sounds and maintains thrust throughout the performance.

The New World Symphony came about during Dvorak's tenure as director of the National Conservatory of Music of America, taking influence from a keen interest he developed in Native American music and the musical traditions of African-American spirituals, leading him to strongly encourage the development of the American sound through the customs of its everyday people. Conductor James Gaffigan is currently chief conductor of the Luzerner Sinfonieorchester and guests here as part of a busy season which also sees him conducting the Chicago and Detroit symphonies and Orchestre National de France, among others. The concert is a part of SF Symphony's celebration of the American sound throughout the year.

Sound good to you? Share this page on social media and let your friends know about San Francisco Symphony - Marsalis and Dvorak at Davies Symphony Hall.