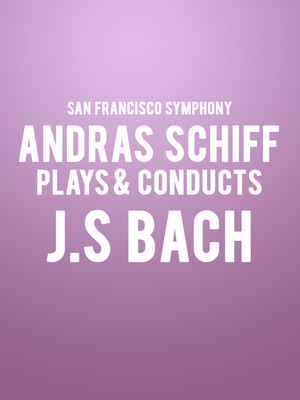 Schiff performed Bach...and transformed the huge and well-filled hall into a bowl of rapt silence

Sir Andras Schiff returns to lead the San Francisco Symphony in a program that also sees him tackle the genius of Bach, and his 19th-century champion, Felix Mendelssohn. Featuring some of his most enthralling Keyboard Concertos, enjoy an evening celebrating the Baroque master, as interpreted by Royal Academy of Music Bach Prize-winner Schiff.

Alongside Keyboard Concertos 3, 4 and 7, there is also the chance to hear Mendelssohn's Lobgesang. As one of the leaders of the Bach revival in the 1820s, it is apt that now the two share a billing, a tribute to their combined influence and virtuosity.

Sound good to you? Share this page on social media and let your friends know about San Francisco Symphony - Andras Schiff Plays and Conducts J.S Bach at Davies Symphony Hall.